Forest Steven Whitaker (born July 15, 1961) is an American actor, producer, and director.He has earned a reputation for intensive character study work for films such as Lee Daniels' The Butler, Battlefield Earth, Bird and Ghost Dog: The Way of the Samurai, for his work in direct-to-video films and for his recurring role as ex-LAPD Lieutenant Jon Kavanaugh on the award-winning television series The Shield.Whitaker won an Academy Award, a Golden Globe and a BAFTA for his performance as Ugandan dictator Idi Amin in the 2006 film The Last King of Scotland. 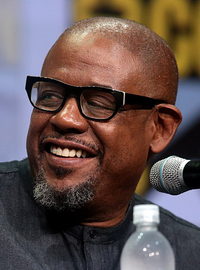 image credit
Forest Whitaker by Gage Skidmore, is licensed under cc-by-sa-3.0, resized from the original.