Felice Nicole Herrig (born September 18, 1984) is an American kickboxer, Muay Thai fighter, and mixed martial artist. Born in Buffalo Grove, Illinois, she began her career practicing kickboxing and Muay Thai before transitioning to MMA in 2009. In September 2011, she signed a multi-fight deal with XFC in Florida.Herrig is currently the #9-ranked female strawweight fighter in the world according to the Unified Women's MMA Rankings. 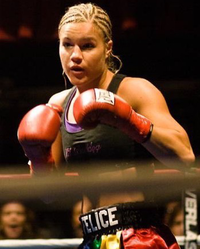 image credit
Felice Herrig by Aristotle Labiaga, is licensed under cc-by-sa-2.0, resized from the original.