Leslie Feist (born 13 February 1976), known professionally as Feist, is a Canadian singer-songwriter, performing both as a solo artist and as a member of the indie rock group Broken Social Scene.Feist launched her solo music career in 1999 with the release Monarch (Lay Your Jewelled Head Down). Her subsequent studio albums, Let It Die, released in 2004, and The Reminder, released in 2007, were critically acclaimed and commercially successful, selling over 2.5 million copies. 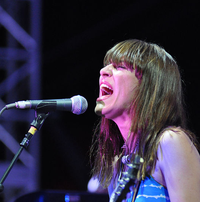 image credit
Feist (singer) by Jason Persse, is licensed under cc-by-sa-2.0, resized from the original.