Faye Wong (born 8 August 1969) is a Chinese singer-songwriter and actress, often referred to as a "diva" (Chinese: 天后; literally: "Heavenly Queen") in Chinese-language media. Early in her career she briefly used the stage name Shirley Wong. Born in Beijing, she moved to British Hong Kong in 1987 and came to public attention in the early 1990s by singing ballads in Cantonese. Since 1994 she has recorded mostly in her native Mandarin, often combining alternative music with mainstream Chinese pop. In 2000 she was recognised by Guinness World Records as the Best Selling Canto-Pop Female. Following her second marriage in 2005 she withdrew from the limelight, but returned to the stage in 2010 amidst immense interest in the Sinophone world. Hugely popular in Mainland China, Taiwan, Hong Kong and Singapore, she has also gained a large following in Japan. In the West she is perhaps best known for starring in Wong Kar-wai's films Chungking Express and 2046. While she has collaborated with international artists such as Cocteau Twins, Wong recorded only a few songs in English, including "Eyes on Me" – the theme song of the video game Final Fantasy VIII. Wong is known to be reserved in public, and has gained a reputation for her "coolness". In Encyclopedia of Contemporary Chinese Culture, Jeroen de Kloet characterised her as "singer, actress, mother, celebrity, royalty, sex symbol and diva all at the same time". 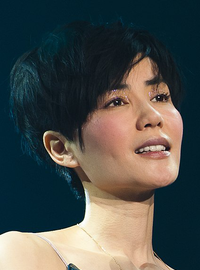 image credit
Faye Wong by Brandon Lim, is licensed under cc-by-sa-2.0, resized from the original.