Eva Charlotte Dahlgren (/ˈeɪvə ˈdɑːlɡrᵻn/ in English; born 9 June 1960 in Umeå, Sweden) is a Swedish pop musician. Dahlgren was discovered by musician/producer Bruno Glenmark in 1978 after appearing on the TV show "Sveriges magasin" and her debut album Finns det nån som bryr sej om was released the same year. In 1979 she placed third in Melodifestivalen (the tryout competition for the Eurovision Song Contest in Sweden). She toured Sweden in 1987 with Swedish pop duo Roxette, a tour that was attended for more than 100.000 people. Dahlgren's career grew steadily with several album releases during the 1980s but her definite breakthrough in Sweden came in 1991 with the hit album En blekt blondins hjärta which sold over half a million copies and netted the singer five Grammis awards. In 1996 Dahlgren made headlines in the Swedish press when she came out as a lesbian through her civil union with jewellery designer Efva Attling. In connection with the civil union, Dahlgren changed her surname to Dahlgren-Attling.In 2009 they got married, after Sweden passed its gender neutral marriage law. Eva Dahlgren toured July - August 2008 together with Peter Jöback in Sweden, Norway and Finland. The tour was called "Himlen är inget tak", and a single with the same title was released. 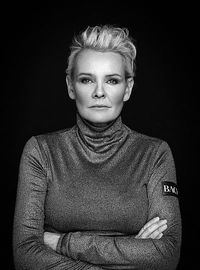 image credit
Eva Dahlgren by Sanna Dahln, is licensed under cc-by-3.0, resized from the original.