Eugene William Pallette (July 8, 1889 – September 3, 1954) was an American actor. He appeared in over 240 silent era and sound era motion pictures between 1913 and 1946. After an early career as a slender leading man, Pallette appeared for decades as very obese with a large stomach and deep, gravelly voice, probably best-remembered for comic character roles such as Alexander Bullock, Carole Lombard's father, in My Man Godfrey (1936), as Friar Tuck in The Adventures of Robin Hood (1938) starring Errol Flynn, and his similar role as Fray Felipe in The Mark of Zorro (1940) starring Tyrone Power. 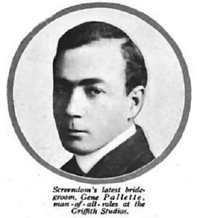