Eric Frederic Trump (born January 6, 1984) is an American businessman and philanthropist. He is the third child of American businessman Donald J. Trump and his first wife, Ivana Trump. He is Executive Vice President, Development and Acquisitions, at The Trump Organization, and directs all new project acquisition and development throughout the world, alongside his brother, Donald, Jr., and sister, Ivanka. In 2006, he founded The Eric Trump Foundation, which has donated and pledged over $28 million to St. Jude Children's Research Hospital. He also owns Trump Winery. 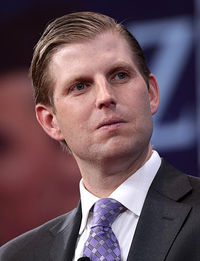 image credit
Eric Trump by Gage Skidmore, is licensed under cc-by-sa-3.0, resized from the original.