Eric Stoltz (born September 30, 1961) is an American actor, director and producer. He is known for playing the role of Rocky Dennis in the biographical drama film Mask, which earned him the nomination for a Golden Globe Award for Best Supporting Actor in a Motion Picture, and has appeared in a wide variety of films from mainstream fare like Some Kind of Wonderful to independent films like Pulp Fiction, Killing Zoe, and Kicking and Screaming. He recently portrayed Daniel Graystone in the science fiction television series Caprica, and became a regular director on the television series, Glee. 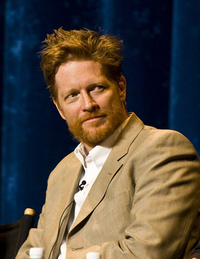 image credit
Eric Stoltz by oscalito, is licensed under cc-by-sa-2.0, resized from the original.