Eric Emerson Schmidt (born April 27, 1955) is an American software engineer, businessman, and the executive chairman of Google. In 2013, Forbes ranked Schmidt as the 138th-richest person in the world, with an estimated wealth of $8.3 billion.As an intern at Bell Labs, Schmidt did a complete re-write of Lex, a program to generate lexical analysers for the Unix computer operating system. From 1997 to 2001, he was chief executive officer of Novell. From 2001 to 2011, he served as the CEO of Google. He served on various other boards in academia and industry, such as the boards of trustees for both Carnegie Mellon University and Princeton University. 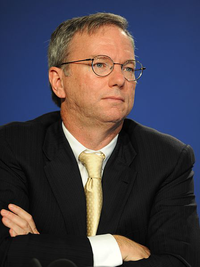 image credit
Eric Schmidt by Guillaume Paumier, is licensed under cc-by-3.0, resized from the original.