Orlando Colón (born March 24, 1982) is a Puerto Rican professional wrestler. He began working in Hybrid Pro Wrestling, an independent circuit in Schoolcraft, Michigan. In 2006, Colón debuted in the World Wrestling Council, a promotion owned by his uncle, Carlos Colón. His cousins are Primo and former WWE wrestler, Carlito. While working with WWC, he had a brief participation in Pro Wrestling Zero1. In January 2010, Colón left the WWC after signing a development contract with WWE where he appears as Fernando (formerly as Epico), where he was one-half of the WWE Tag Team Champions with his real-life cousin Primo. He also works for World Wrestling Council. 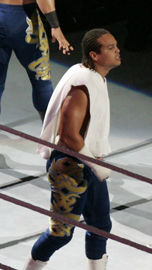 image credit
Epico by Eva Rinaldi, is licensed under cc-by-sa-2.0, resized from the original.