Marshall Bruce Mathers III (born October 17, 1972), better known by his stage name Eminem and by his alter ego Slim Shady, is an American rapper, record producer, songwriter, and actor. In addition to his solo career, Eminem is a member of the group D12, as well as one half of the hip hop duo Bad Meets Evil, alongside Royce da 5'9". Eminem is one of the world's best-selling music artists and is the best-selling artist of the 2000s. He has also made cameo appearances in The Wash (2001), Funny People (2009), and the television series Entourage. 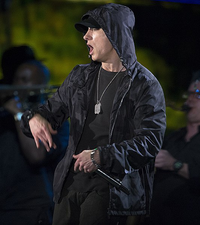 image credit
Eminem by DOD News Features, is licensed under cc-by-2.0, resized from the original.