Emanuele Giaccherini (Italian pronunciation: [emanuˈɛle d͡ʒakkeˈrini]; born 5 May 1985) is an Italian professional footballer who plays as an attacking midfielder for Serie A club Napoli, and the Italy national football team. He began his career at Cesena, and after loans at three lower-league clubs, helped them to consecutive promotions to reach Serie A. He then left to Juventus, where he won the league title in both of his seasons, before joining Sunderland on a four-year deal in 2013. Giaccherini has earned over 20 caps for the Italy national football team, helping the nation to the final of UEFA Euro 2012 and a third-place finish at the 2013 FIFA Confederations Cup, also taking part at UEFA Euro 2016. 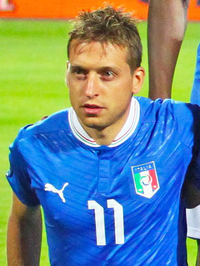 image credit
Emanuele Giaccherini by Biser Todorov, is licensed under cc-by-3.0, resized from the original.