Ellen Kathleen Pompeo (/pʌmˈpɛoʊ/; born November 10, 1969) is an American actress, best known for her role as Meredith Grey in the ABC medical drama Grey's Anatomy (2005–present). In 2007, this role earned her a Golden Globe Award for Best Actress – Television Series Drama nomination. In film, she appeared in Moonlight Mile (2002), Old School (2003), and Daredevil (2003). 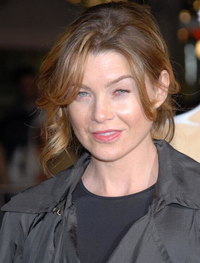 image credit
Ellen Pompeo by lukeford.net, is licensed under cc-by-sa-2.5, resized from the original.