Ella Jane Fitzgerald (April 25, 1917 – June 15, 1996) was an American jazz vocalist with a vocal range spanning three octaves (D♭3 to D♭6). Often referred to as the "First Lady of Song" and the "Queen of Jazz," she was noted for her purity of tone, impeccable diction, phrasing and intonation, and a "horn-like" improvisational ability, particularly in her scat singing.Fitzgerald was a notable interpreter of the Great American Songbook. Over the course of her 60-year recording career, she sold 40 million copies of her 70-plus albums, won 14 Grammy Awards and was awarded the National Medal of Arts by Ronald Reagan and the Presidential Medal of Freedom by George H. W. Bush. 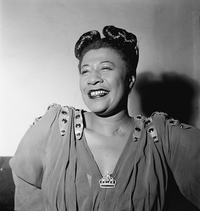