Florence Nightingale Graham (December 31, 1884 – October 18, 1966), who went by the business name Elizabeth Arden, was a Canadian American businesswoman who founded what is now Elizabeth Arden, Inc., and built a cosmetics empire in the United States. At the peak of her career, she was one of the wealthiest women in the world. 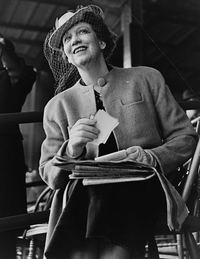