Elisabeth Singleton Moss (born July 24, 1982) is an American actor. Her notable roles include Peggy Olson, secretary-turned-copywriter on the AMC series, Mad Men (2007–present); Zoey Bartlet, the youngest daughter of President Josiah Bartlet, on the NBC television series The West Wing (1999–2006); and Robin Griffin in the miniseries Top of the Lake (2013), the latter of which won her a Golden Globe and Satellite Awards for Best Actress in a Miniseries and/or TV film. 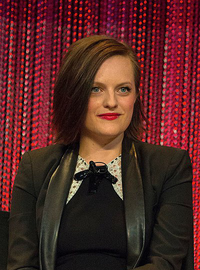 image credit
Elisabeth Moss by Dominick D, is licensed under cc-by-sa-2.0, resized from the original.