(This name uses Eastern Slavic naming customs; the patronymic is Sergeyevna and the family name is Vesnina.) Elena Sergeyevna Vesnina (Russian: Еле́на Серге́евна Веснина́ IPA: [jɪˈlʲɛnə vʲɪsnʲɪˈna]; born 1 August 1986) is a Russian professional tennis player. Her career-high rankings are World No. 20 in singles and World No. 3 in doubles. Vesnina is a three-time Grand Slam champion in doubles competition, having won the 2013 French Open and the 2014 US Open tournaments with Ekaterina Makarova, and the 2016 Australian Open mixed doubles title with Bruno Soares. Vesnina debuted at a main draw WTA tournament in Quebec. One of her best seasons was in 2009, reaching her first WTA final and attaining a ranking of 24 in the year end. She repeated her success in 2013, reaching her best for a long period ranking of 21 on 22 July. Then she won her first WTA titles in Hobart and Eastbourne. In October 2014 she left the top-100 singles world ranking. In doubles, Vesnina partnered with tennis players such as Viktoria Azarenka, Dinara Safina, Maria Kirilenko and Sania Mirza, having notable success. In May 2012, she started partnership with Ekaterina Makarova, becoming one of the strongest women's tennis duos. They won two Grand Slams and three other WTA titles. In 2014, Vesnina updated her world ranking to No. 3. In early 2015, Vesnina decided to partner with Daria Kasatkina for a short time, while concentrating more in singles. After her marriage in late 2015, Vesnina quickly rose in singles. Starting in 2016 as a player ranked outside the 100, Vesnina could endure several qualifications, such as in Doha, where she reached the quarterfinals, and Charleston, where she became runner-up. Following Charleston, she jumped over 20 ranking positions, and after Strasbourg and Roland Garros, she got into the top 50. A high point was reaching the semifinals at the 2016 Wimbledon, becoming third among women's tennis players who debuted at a Grand Slam semifinal after a span of appearances. As a result, Vesnina jumped 26 ranking positions, from World No. 50 to No. 24. On 12 September, Vesnina improved her career-high singles ranking to No. 19. 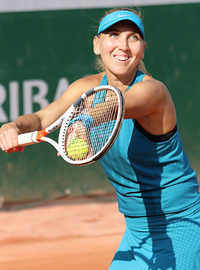 image credit
Elena Vesnina by si.robi, is licensed under cc-by-sa-2.0, resized from the original.