Eileen Chang (September 30, 1920 – September 8, 1995), also known as Zhang Ailing or Chang Ai-ling, was one of the most influential modern Chinese writers. Her most famous works include Lust, Caution and Love in a Fallen City.Chang is noted for her fiction writings that deal with the tensions between men and women in love, and are considered by some scholars to be among the best Chinese literature of the period. 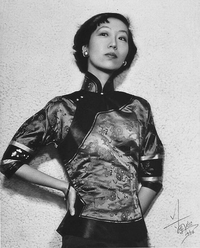