This article is about the actor-director born in 1968; for other people with the same name, see Edward Burns (disambiguation).Edward Fitzgerald Burns (born January 29, 1968) is an American actor, film producer, writer, and director best known for appearing in several films like Saving Private Ryan (1998) and One Missed Call (2008). Burns made his directorial debut with movies such as The Brothers McMullen (1995), She's the One (1996) and Sidewalks of New York (2001). 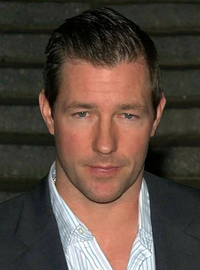 image credit
Edward Burns by Ed_Burns_and_Christy_Turlington_Shankbone_by_David_Shankbone.jpg, is licensed under cc-by-2.0, resized from the original.