Edward Regan "Eddie" Murphy (born April 3, 1961) is an American comedian, actor, writer, singer, director, and musician.Box-office takes from Murphy's films make him the fourth-highest grossing actor in the United States. He was a regular cast member on Saturday Night Live from 1980 to 1984 and has worked as a stand-up comedian. Murphy has played multiple roles in Coming to America, Wes Craven's Vampire in Brooklyn, the Nutty Professor films (where he played the title role in two incarnations, plus his father, brother, mother, and grandmother), Bowfinger, Norbit, and Meet Dave. 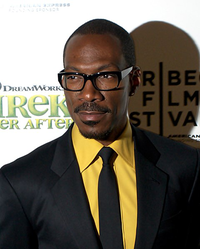 image credit
Eddie Murphy by David Shankbone, is licensed under cc-by-2.0, resized from the original.