Edward Christopher "Ed" Sheeran (born 17 February 1991) is an English singer-songwriter and musician. Born in Hebden Bridge, West Yorkshire and raised in Framlingham, Suffolk, he moved to London in 2008 to pursue a musical career. In early 2011, Sheeran released an independent extended play, No. As part of his x world tour, Sheeran will play three concerts at London's Wembley Stadium in July 2015, his biggest solo shows to date. 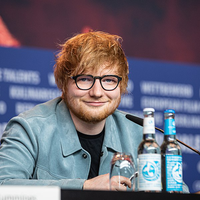 image credit
Ed Sheeran by Harald Krichel, is licensed under cc-by-sa-3.0, resized from the original.