Eric Lynn Wright (September 7, 1963 – March 26, 1995), better known by his stage name Eazy-E, was an American rapper who performed solo and in the hip hop group N.W.A. When reviewing Eazy's albums, many critics noted his unique overall style, with Steve Huey of the All Music Guide summing up: "While his technical skills as a rapper were never the greatest, his distinctive delivery (invariably described as a high-pitched whine), over-the-top lyrics, and undeniable charisma made him a star. 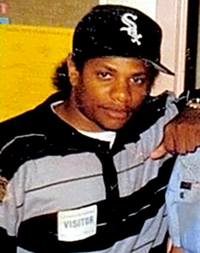 image credit
Eazy-E by here, is licensed under cc-by-2.0, resized from the original.