Dwayne Douglas Johnson (born May 2, 1972), also known by his ring name The Rock, is an American actor and semi-retired professional wrestler, known for his time in WWE. Johnson was a college football player for the University of Miami, winning a national championship on the 1991 Miami Hurricanes football team. He later played for the Calgary Stampeders in the Canadian Football League, and was cut two months into the 1995 season. He has since appeared in several films, including The Rundown, Be Cool, Walking Tall, Gridiron Gang, The Game Plan, Get Smart, Race to Witch Mountain, Planet 51, Tooth Fairy, Doom, The Other Guys, Faster, Fast Five, and Fast & Furious 6. 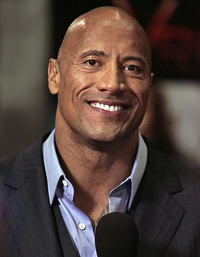 image credit
Dwayne Johnson by Eva Rinaldi, is licensed under cc-by-sa-2.0, resized from the original.