Group Captain Sir Douglas Robert Steuart Bader /ˈbɑːdər/ CBE, DSO & Bar, DFC & Bar, FRAeS, DL (21 February 1910 – 5 September 1982) was a Royal Air Force (RAF) fighter ace during the Second World War. He was credited with 20 aerial victories, four shared victories, six probables, one shared probable and 11 enemy aircraft damaged.Bader joined the RAF in 1928, and was commissioned in 1930. In December 1931, while attempting some aerobatics, he crashed and lost both his legs. Having been on the brink of death, he recovered, retook flight training, passed his check flights and then requested reactivation as a pilot. Although there were no regulations applicable to his situation, he was retired against his will on medical grounds. After the outbreak of the Second World War in 1939, however, Bader returned to the RAF and was accepted as a pilot. He scored his first victories over Dunkirk during the Battle of France in 1940. He then took part in the Battle of Britain and became a friend and supporter of Air Vice Marshal Trafford Leigh-Mallory and his "Big Wing" experiments. 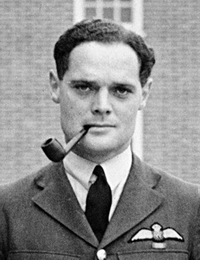