Dorothy Malone (born January 30, 1925) is an American actress. Her film career began in 1943, and in her early years she played small roles, mainly in B-movies. After a decade in films, she began to acquire a more glamorous image, particularly after her performance in Written on the Wind (1956), for which she won the Academy Award for Best Supporting Actress. Her film career reached its peak by the beginning of the 1960s, and she achieved later success with her television role as Constance MacKenzie on Peyton Place from 1964 to 1968. Less active in her later years, Malone returned to films in 1992 as the friend of Sharon Stone's character in Basic Instinct. She is one of the last surviving stars from the Golden Age of Hollywood. 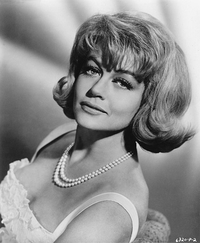 image credit
Dorothy Malone by Studio Publicity, is licensed under cc-by-sa-4.0, resized from the original.