Donnie Yen (born 27 July 1963), also known as Yen Ji-dan (甄子丹), is a Hong Kong actor, martial artist, film director and producer, action choreographer, and world wushu tournament medalist. He is best known for his role as Ip Man in the eponymous film.Yen is credited by many for contributing to the popularization of the traditional martial arts style known as Wing Chun. 4 million USD) from four films and six advertisements in 2013. 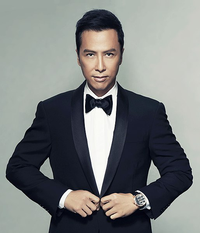 image credit
Donnie Yen by Cecilia Wang, is licensed under cc-by-4.0, resized from the original.