LaDonna Adrian Gaines (December 31, 1948 – May 17, 2012), known by her stage name, Donna Sommer, later Donna Summer, was an American singer and songwriter who gained prominence during the disco era of the late 1970s. A five-time Grammy Award winner, she was the first artist to have three consecutive double albums reach #1 on the United States Billboard album chart and charted four number-one singles in the United States within a 13-month period. Summer has reportedly sold over 100 million records, making her one of the world's best-selling artists of all time. In 2013, Summer was inducted into the Rock & Roll Hall of Fame. 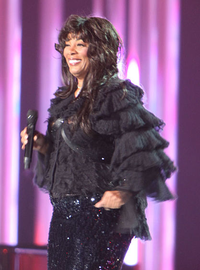 image credit
Donna Summer by Harrywad, is licensed under cc-by-sa-3.0, resized from the original.