Donny Wayne "Don" Johnson (born December 15, 1949) is an American actor and recording artist perhaps best known for his lead role as James "Sonny" Crockett in the 1980s television series, Miami Vice. He also played the lead role in the 1990s cop series, Nash Bridges. Johnson is a Golden Globe winning actor for his role in Miami Vice, a winner of the American Power Boat Association Offshore World Cup, and has received a star on the Hollywood Walk of Fame. He is also a singer, songwriter, producer, and director. 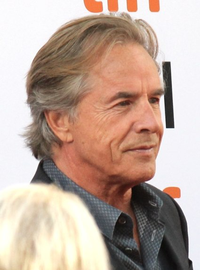 image credit
Don Johnson by Peter Kudlacz, is licensed under cc-by-2.0, resized from the original.