Dolly Rebecca Parton (born January 19, 1946) is an American singer-songwriter, multi-instrumentalist, actress, author and philanthropist, best known for her work in country music.Beginning her career as a child performer, Parton issued a few modestly successful singles from 1959 through the mid-1960s, showcasing her distinctive soprano voice. She rose to greater prominence in 1967 as a featured performer on singer Porter Wagoner's weekly television program; their first duet single, a cover of Tom Paxton's "The Last Thing on My Mind", was a top-ten hit on the country singles charts, and led to several successful albums before they ended their partnership in 1974. 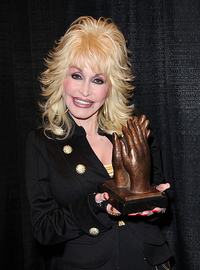 image credit
Dolly Parton by Curtis Hilbun, is licensed under cc-by-3.0, resized from the original.