Diego da Silva Costa (Spanish: [ˈdjeɣo ða ˈsilβa ˈkosta], Portuguese: [ˈdʒjeɡu dɐ ˈsiwvɐ ˈkɔstɐ]; born 7 October 1988) is a Spanish professional footballer who plays for Atlético Madrid in La Liga, as a striker.Costa began his career with Braga in Portugal. He was signed by Atlético Madrid in 2007, who loaned him back to Braga, and then to Celta and Albacete before selling him to Valladolid in 2009. He returned to Atlético the following season, and went on to become a key part of their attack.Internationally, Costa played twice with Brazil in 2013, but later declared his desire to represent Spain, having been granted Spanish citizenship in September 2013. He made his debut for his adopted nation in March 2014. 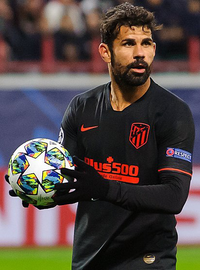 image credit
Diego Costa by , is licensed under cc-by-sa-3.0, resized from the original.