Richard Andrew "Dick" Gephardt (/ˈɡɛp.hɑrt/; born January 31, 1941) is a former politician of the Democratic Party. Gephardt served as a U.S. Representative from Missouri from January 3, 1977, until January 3, 2005, serving as House Majority Leader from 1989 to 1995, and as Minority Leader from 1995 to 2003. He also ran unsuccessfully for the Democratic nomination for President of the United States in 1988 and 2004. Gephardt was mentioned as a possible vice presidential nominee in 1988, 1992, 2000, 2004, and 2008.Since his retirement from politics, Gephardt has become a significant lobbyist. He founded a Washington-based public affairs firm, Gephardt Government Affairs, and an Atlanta-based labor consultancy, the Gephardt Group, as well as consulting for DLA Piper, FTI Consulting and Goldman Sachs. 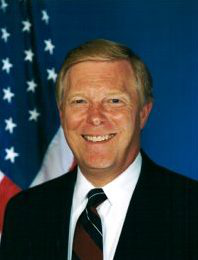