Derek Anthony Klena (born October 3, 1991) is an American actor and singer. He is best known for his work on Broadway, including originating the roles of Nick Healy in Jagged Little Pill (2019–2021), Dmitry in Anastasia (2017–2018), and Michael in The Bridges of Madison County (2014). His breakthrough was in the original Off-Broadway production of Pasek & Paul's stage adaptation of Dogfight, and he played Fiyero in the 10th anniversary company of Wicked on Broadway. He has made appearances on several television series such as Unbreakable Kimmy Schmidt, The Code, and Pretty Little Liars: Original Sin. In 2020, Klena was nominated for a Tony Award for Best Featured Actor in a Musical for his portrayal of Nick Healy in Jagged Little Pill. 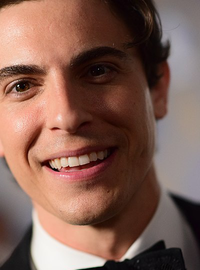 image credit
Derek Klena by Philip Romano, is licensed under cc-by-sa-4.0, resized from the original.