David Jude Jolicoeur (born 21 September 1968, in Brooklyn, New York), also known under the stage name Trugoy the Dove and more recently Dave, is an American rapper, producer, and one third of groundbreaking hip hop trio De La Soul.Jolicoeur, Vincent Mason and Kelvin Mercer were friends who attended the same high school in the Amityville area of Long Island during the 1980s. After they decided to form a rap group, each member re-christened themselves with an outlandish name (Trugoy the Dove, P.A. Pasemaster Mase and Posdnuos, respectively). Early on, Jolicoeur sported a unique style of African medallions, peace signs and uneven dreadlocks (known as the "De La Do"). Paired with the positive messages of the group's debut effort, 3 Feet High and Rising, the image led to critics and journalists labelling the members as "the hippies of hip hop" (a title that the group was quick to refute with the release of the second album De La Soul Is Dead in 1991).Jolicoeur is also a member of the Spitkicker collective. 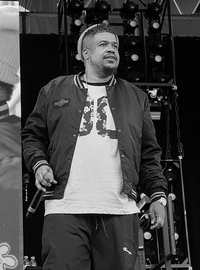 image credit
David Jude Jolicoeur by Sven Volkens, is licensed under cc-by-sa-4.0, resized from the original.