David Michael Draiman (born March 13, 1973) is an American songwriter and the lead singer for the heavy metal band Disturbed as well as for the band Device. Draiman is known for his distorted voice and percussive singing style. In November 2006, Draiman was voted number 42 on the Hit Parader’s "Top 100 Metal Vocalists of All Time". Draiman has written some of Disturbed's most successful singles, such as Stupify, Down with the Sickness, Indestructible andInside The FireIn October 2011, Disturbed entered a hiatus. Draiman announced in the following year that he was working on an industrial rock/metal project with Geno Lenardo, formerly of Filter, which was later named Device.In January 2013, it was announced that Draiman would produce Floridian metal band Trivium's 6th album, Vengeance Falls, in Austin, Texas. 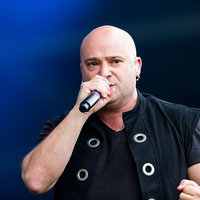 image credit
David Draiman by Sven Mandel, is licensed under cc-by-sa-4.0, resized from the original.