David Robert Joseph Beckham OBE, /ˈbɛkəm/ (born 2 May 1975) is an English former footballer. He has played for Manchester United, Preston North End, Real Madrid, Milan, Los Angeles Galaxy, Paris Saint-Germain, and the England national team for which he holds the appearance record for an outfield player. He was the first English player to win league titles in four countries (which were England, Spain, the United States and France). In 2009, the couple's joint wealth was estimated at £125 million. 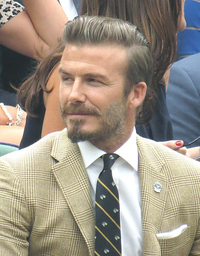 image credit
David Beckham by Brian MInkoff-London Pixels, is licensed under cc-by-sa-3.0, resized from the original.