David Michael "Dave" Navarro (born June 7, 1967) is an American guitarist, singer and songwriter. He is best known as a founding member of the alternative rock band Jane's Addiction, with whom he has recorded four studio albums, and as a former member of the Red Hot Chili Peppers. Navarro has also been a member of the Jane's Addiction spin-off bands, Deconstruction and The Panic Channel, and, in 2001, released a solo album, entitled Trust No One. Navarro recorded one studio album with the band, One Hot Minute (1995), before his dismissal in 1998 due to creative differences. 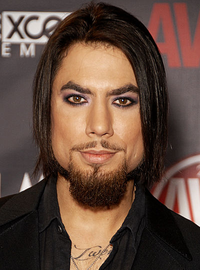 image credit
Dave Navarro by Glenn Francis, is licensed under cc-by-sa-3.0, resized from the original.