Dan "Danny" Trejo (Spanish pronunciation: [ˈtɾexo]; born May 16, 1944) is an American actor who has appeared in numerous Hollywood films, often as hypermasculine characters, villains and anti-heroes. Some of his notable films include Heat, Con Air, Machete, and Desperado, the latter two with frequent collaborator Robert Rodriguez. 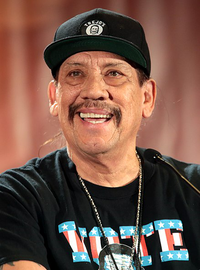 image credit
Danny Trejo by Gage Skidmore, is licensed under cc-by-sa-3.0, resized from the original.