Danielle Nicole Panabaker (born September 19, 1987) is an American actress. She is best known for her roles in the Disney Channel films Stuck in the Suburbs (2004) and Read It and Weep (2006), along with her younger sister Kay Panabaker. She came to prominence as a cast member alongside James Woods in the CBS legal drama series Shark (2006–2008) and is also noted as a Scream Queen, having starred in the horror films Friday the 13th (2009), The Crazies and John Carpenter's The Ward (both 2010) and Piranha 3DD (2012). Her other films include Sky High (2005) and Mr. Brooks (2007). In April 2014, Panabaker guest-starred as Caitlin Snow on The CW television series Arrow, and will reprise her role as one of the main characters in the spin-off The Flash, which will premiere in the fall of the same year. 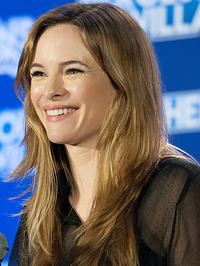 image credit
Danielle Panabaker by Heroes & Villains, is licensed under cc-by-sa-2.0, resized from the original.