Daniela Denise Katzenberger (born 1 October 1986) is a German reality TV personality, actress, restaurateur, singer, television presenter, and model. Her first single, a version of Nothing's Gonna Stop Me Now reached number 19 in the German single charts in 2010. She has featured in several television shows in Germany, mostly on VOX. 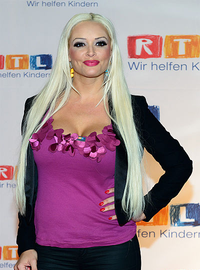 image credit
Daniela Katzenberger by Michael Schilling, is licensed under cc-by-sa-3.0, resized from the original.