Dan Brown (born June 22, 1964) is an American author of thriller fiction who is best known for the 2003 bestselling novel, The Da Vinci Code. Brown's novels are treasure hunts set in a 24-hour period, and feature the recurring themes of cryptography, keys, symbols, codes, and conspiracy theories. His books have been translated into 52 languages, and as of 2012, sold over 200 million copies. The Robert Langdon series is currently the seventh highest selling series of all time. 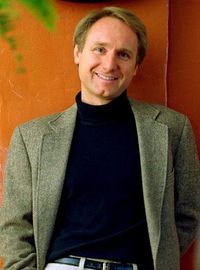 image credit
Dan Brown by Photographer Philip Scalia, is licensed under cc-by-sa-3.0, resized from the original.