Cynthia Ann Stephanie "Cyndi" Lauper (born June 22, 1953) is an American singer-songwriter, actress, and LGBT rights activist whose career has spanned over four decades. Her debut solo album She's So Unusual (1983) was an instant commercial success. The album was the first debut female album to chart four top-five hits on the Billboard Hot 100—"Girls Just Want to Have Fun," "Time After Time," "She Bop," and "All Through the Night," earning Lauper the Best New Artist award at the 27th Grammy Awards in 1985. Her charitable efforts were recognized in 2013, when the singer was invited as a special guest to attend President Barack Obama's second-term inaugural ceremony. 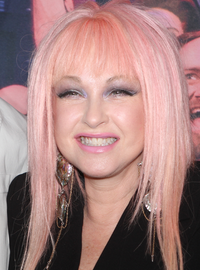 image credit
Cyndi Lauper by Eva Rinaldi, is licensed under cc-by-sa-2.0, resized from the original.