Courtney Michelle Love (born Courtney Michelle Harrison, July 9, 1964) is an American singer-songwriter, musician, actress, and artist. The daughter of psychotherapist Linda Carroll and writer and ex-Grateful Dead manager Hank Harrison, Love began her career as an actress in her early twenties, landing roles in Alex Cox's cult films Sid and Nancy (1986) and Straight to Hell (1987), and later rose to international prominence as frontwoman of alternative rock band Hole, which she formed in 1989. Her uninhibited stage presence and confrontational lyrics, combined with publicity surrounding her 1992 marriage to Kurt Cobain, made her a noticeable and controversial figure in the alternative music scene of the 1990s. Later that month, Love debuted her new solo song, "You Know My Name" on BBC Radio 6, which is due for release May 4, 2014. 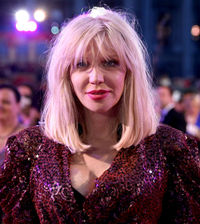