María José de Pablo Fernández, better known as Cote de Pablo (born November 12, 1979), is a Chilean-American actress and recording artist. Born in Santiago, Chile, she moved to the United States at the age of 10, where she studied acting.De Pablo co-hosted episodes of the Latin American talk show Control with former Entertainment Tonight host, Carlos Ponce, at the age of 15 before attending Carnegie Mellon University to study music and theatre. 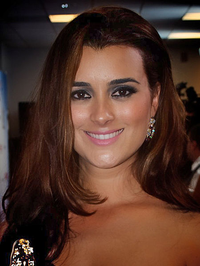 image credit
Cote de Pablo by Hispanic Lifestyle, is licensed under cc-by-sa-2.0, resized from the original.