Phillip Jack "Phil" Brooks (born October 26, 1978), better known by his ring name CM Punk, is an American professional wrestler signed to WWE. He is titled in the company as "the longest-reigning WWE Champion of the modern era", having held the title for 434 days from November 20, 2011 to January 27, 2013. Punk is officially recognized as the sixth-longest reigning champion of all time. Depending on Punk's alignment as a fan favorite or villain, he has emphasized different aspects of the culture to arouse the desired audience reaction. 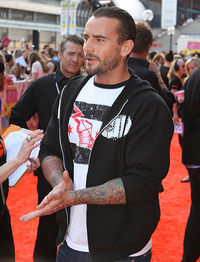 image credit
CM Punk by Eva Rinaldi, is licensed under cc-by-sa-2.0, resized from the original.