Christopher D'Olier Reeve (September 25, 1952 – October 10, 2004) was an American actor, film director, producer, screenwriter, author and activist. He achieved stardom for his acting achievements, in particular his motion-picture portrayal of the DC comic book superhero, Superman.On May 27, 1995, Reeve became a quadriplegic after being thrown from a horse during an equestrian competition in Culpeper, Virginia. 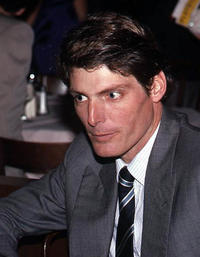 image credit
Christopher Reeve by Jbfrankel, is licensed under cc-by-sa-3.0, resized from the original.