This article is about the actor. Not to be confused with Christopher Lloyd (screenwriter). For others see Christopher Lloyd (disambiguation).Christopher Allen Lloyd (born October 22, 1938) is an American actor. Among his best-known roles are Emmett "Doc" Brown in the Back to the Future trilogy, Uncle Fester in The Addams Family and its sequel Addams Family Values, and Judge Doom in Who Framed Roger Rabbit. He rose to prominence in the 1980s as Jim Ignatowski in the television series Taxi.Lloyd, who also has done voiceover work in animation, has won three Primetime Emmy Awards and an Independent Spirit Award, and has been nominated for two Saturn Awards and a Daytime Emmy Award. 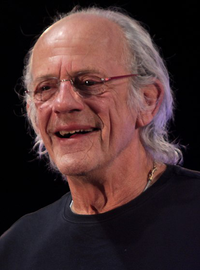 image credit
Christopher Lloyd by Gage Skidmore, is licensed under cc-by-sa-2.0, resized from the original.