Christine and the Queens

Héloïse Adélaïde Letissier (French: [elɔiz adəlaid lətisje]; born 1 June 1988), known professionally as Christine and the Queens or occasionally simply Chris, is a French singer, songwriter, and record producer. Born and raised in Nantes, she started learning piano at the age of four and found inspiration in one of London's clubs while studying. Christine released a series of extended plays throughout 2011 – 2013. Her debut album, Chaleur humaine (2014), received critical acclaim, reached number 2 on both French and UK charts, and was certified diamond in France; it was also a best selling debut record in the United Kingdom. In 2018, she released her second album, Chris, to further critical acclaim. It was ranked album of the year by Clash, The Guardian, and The Independent, and placed in top-ten of nine other year-end lists. "Girlfriend" was recognized by Time as song of the year. In reaction to her mother's death, Christine released in 2020 an EP La Vita Nuova, with some critics calling it her strongest work up to that point. Time again named her song, "People, I've Been Sad", the song of the year. In 2016, Christine was ranked number 1 in Vanity Fair's list of most powerful and influential French people who “promote French genius”, ahead of the country's president. The next year, Forbes placed her on its list of 30 most influential and talented people under 30, and Time included her on its list of next generation leaders twice – in 2016 and 2018. Her accolades include four Victories of Music awarded by French Ministry of Culture. 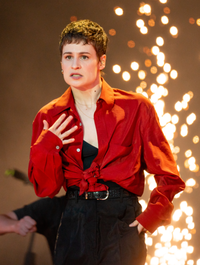 image credit
Christine and the Queens by Raph_PH, is licensed under cc-by-2.0, resized from the original.