Christopher Julius "Chris" Rock III (born February 7, 1965) is an American comedian, actor, screenwriter, television producer, film producer, and director.After working as a standup comic and appearing in small film roles, Rock came to wider prominence as a cast member of Saturday Night Live in the early 1990s. He went on to more prominent film roles as well as a series of acclaimed comedy specials for HBO.He was voted as the fifth greatest stand-up comedian of all time by Comedy Central. He was also voted in the United Kingdom as the ninth greatest stand-up comic on Channel 4’s 100 Greatest Stand-Ups in 2007, and again in the updated 2010 list as the eighth greatest stand-up comic. 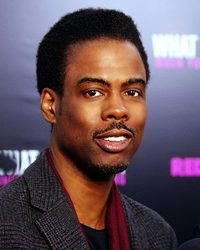 image credit
Chris Rock by David Shankbone, is licensed under cc-by-3.0, resized from the original.