Chloe Kim (Korean: 김선, born April 23, 2000) is an elite American snowboarder, currently sponsored by Target. While being too young to compete in the 2014 Sochi Winter Olympics Kim earned silver in superpipe in the 2014 Winter X Games, coming behind Kelly Clark. In 2015 Chloe won Gold in the super pipe event in the Winter X Games beating Kelly Clark. With this win, at age 14, Kim became the youngest gold medalist until she lost this record to Kelly Sildaru who won gold in 2016 at the age of 13. In the 2016 X Games, she became the first person under the age of 16 to win three gold medals (and thus the first such person to win back-to-back gold medals) at an X Games. Also in 2016, at the U.S. Snowboarding Grand Prix, she became the first woman to land back-to-back 1080 spins in a snowboarding competition. Also in 2016, she became the first American woman to win a gold medal in snowboarding at the Winter Youth Olympic Games, and earned the highest snowboarding score in Youth Olympic Games history at the time. She was selected as Team USA’s flag bearer for the Opening Ceremony of the 2016 Winter Youth Olympic Games, thus becoming the first snowboarder chosen to serve as flag bearer for Team USA at either the Olympic Winter Games or Youth Olympic Games. Kim was nominated for the 2016 ESPYS award for Best Breakthrough Athlete 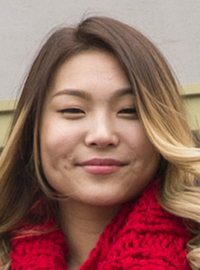