Janney Marín Rivera (born June 26, 1985), better known as Chiquis Rivera, is an American singer and television personality. She is the eldest daughter of singer Jenni Rivera.She began her singing career in early 2014, releasing her first single "Paloma Blanca" as a tribute to her mother. At Premios Juventud, she made her musical debut on international television with her performance of "Esa No Soy Yo". She made her television debut with her reality show Jenni Rivera Presents: Chiquis & Raq-C and also appeared on her mother's hit spin-off reality show I Love Jenni. Rivera's debut album, Ahora, was released on June 2, 2015. On April 7, 2015 she released her memoir titled Forgiveness. Rivera won a Latin Grammy Award for her 2020 album, Playlist. 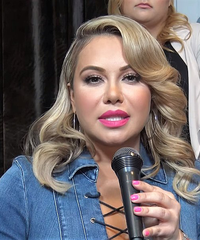 image credit
Chiquis Rivera by Dulce Osuna, is licensed under cc-by-sa-4.0, resized from the original.